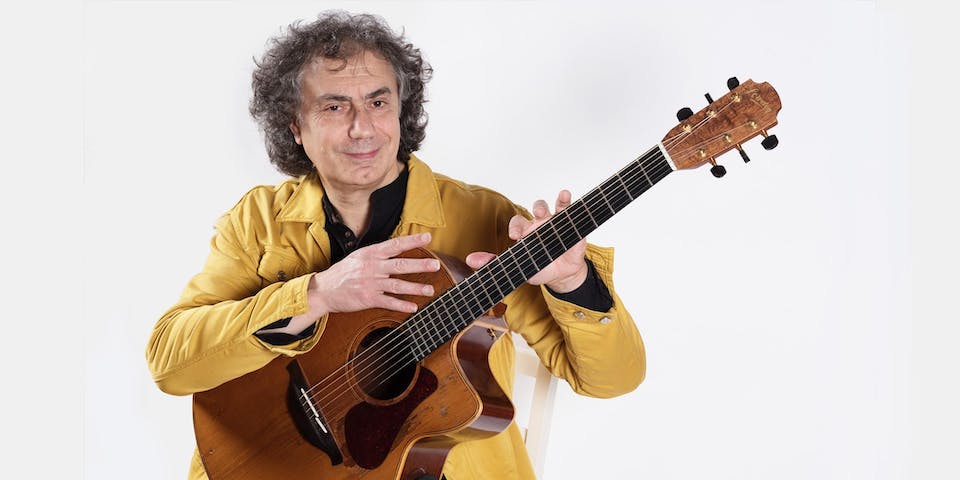 An Evening with Pierre Bensusan

"It is with a heavy heart that Pierre Bensusan has announced that with the exception of concerts throughout this coming weekend and next week, he must cancel and postpone concert dates for the rest of his 2020 North American tour. The looming threat of Coronavirus spreading has caused many of the promoters to cancel these shows (or otherwise face an unbearable level of uncertainty and risk). He is also concerned for his safety, his fans, and the staff at the venues. He has already begun re-booking the tour for 2021 and you will be the first people to learn about it as concerts in your areas become announced.

Pierre has worked for one year to build this 5-month tour which includes about 100 shows, to sync with the release of his new album "Azwan" and his new book "The Pierre Bensusan Guitar Collection" and no doubt he will take a hit with the next few months being difficult, so we encourage you, his fans and friends to purchase these new releases through his website at: www.pierrebensusan.com

From fans who has listened to « Azwan »:

I've listened to your Azwan CD now 4x through and I must say that this is my favorite album of yours. I love the flow of the CD and the album has a special magic to it. The complex rhythms , and harmonic , and melodic movements and developments are matched with what sounds like simplicity and joy. I also love your vocals and chants and the other added instruments...... This is a masterpiece album!!

“Finally got to listen to the cd this evening and absolutely love it. The first piece had me in tears it's so beautiful as is the whole album. I rarely listen to a whole cd at once, but this one I did. It is a masterpiece in my humble opinion. It's emotional, delicate, playful and moving.”

“It’s like the guitar has been given free reign to play it’s self!”

French-Algerian acoustic guitar virtuoso, vocalist and composer Pierre Bensusan, surnamed “Mister DADGAD”, has taken his unique sound to all corners of the globe.

Winner of the Independent Music Award for his triple live album "Encore", voted Best World Music Guitarist by Guitar Player Magazine reader’s Poll, winner of the Rose d’Or at the Montreux Festival for his debut album, Pierre is recognized as one of the greatest guitar players of the 21st century.

Born in Oran, French-Algeria, in 1957, when France was decolonizing its Empire, Pierre Bensusan's family moved to Paris when he was 4. He began formal studies on piano at the age of 7 and at 11 taught himself guitar. Influenced in those early days by the folk revival blooming in Britain, France and North America, Bensusan began first to explore his own diverse musical heritage and then moved to the horizons beyond. He signed his first recording contract at 17, and one year later his first album, "Près de Paris”, won the Grand Prix du Disque upon his debut at the Montreux Festival in Switzerland.

Described by the L.A. Times as "one of the most unique and brilliant acoustic guitar veterans in the world music scene today", Pierre's name became synonymous with contemporary acoustic guitar genius, long before the terms New Age or World Music were invented. He has literally created a style of playing with the ability to make a single guitar sound like an entire band as he brings the audience on a mesmerizing musical journey. And yet, Bensusan is more than what any musician or music lover expects from a guitarist. He is a composer as well as a bilingual and original and improvisational vocalist, with his own scat technique.

Immortalised by the tune “Bensusan” written in tribute by the late Michael Hedges, and referenced as an important inspiration to many other great musicians, Pierre Bensusan is a one-of-a-kind artist whose music transcends genre and time, with an uninhibited sense of musical freedom and expression, a sense of something both playful and serious, otherworldly yet right here right now. His "manner" of playing defies classification - crossing world, classical, jazz, traditional, folk, pop and more. None can be isolated as simply “World Music”, “Celtic”, "Arabic" or “French”; rather, they represent Pierre’s genuine vocabulary and the best part of our world in its current state, a world sharing itself. Not to be missed!

"To say that Bensusan is a master of the guitar is like saying Albert Einstein was good at math." - Woodstock Times