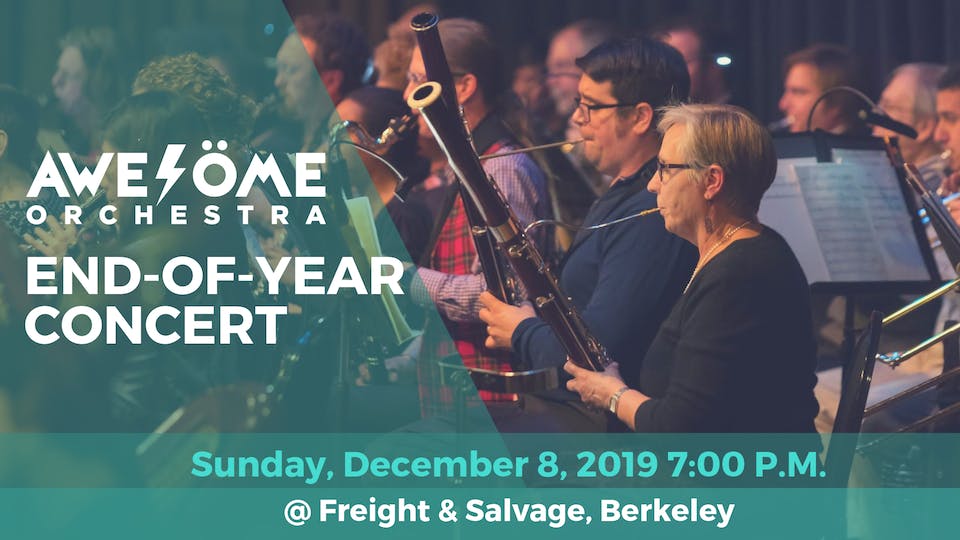 Awesöme Orchestra announces their fifth annual End-of-Year Concert, Sunday, December 8, 2018, 7:00–8:30 p.m. at the Freight & Salvage Coffeehouse in Berkeley. After playing with over 700 local musicians this year at venues all across the Bay Area, Awesöme Orchestra will bring local composers, listeners, musicians, and their ever-widening community under one roof for an evening of celebration, and highlights from their 2019 season. Buy Tickets Here.

The genre-bending evening features a diverse program, including an arrangement of “Steve Biko” from A Tribe Called Quest’s Midnight Marauders with MC RyanNicole, William Grant Still’s Dismal Swamp, and music from The Land Before Time by James Horner. Two local composers will also have their work showcased: Cellista (Freya Seeburger)’s piece “Look Homeward, Angel” from Transfigurations which features MC Demone Carter and Soprano Sarah Booth, and the premiere performance of “Agnus Dei” from Arturo Rodriguez’s Requiem Sinfonica, written in commemoration of those lost in Oakland’s 2016 Ghost Ship Fire.

Arturo Rodriguez has so far composed eight out of nine movements for his Requiem Sinfonica, and for the third year in a row, Awesöme Orchestra is premiering a movement at their End-of-Year Concert. A long term project, Rodriguez and Awesöme Orchestra plan to commission and professionally record all nine movements of Requiem Sinfonica, and premiere them in Oakland on the five-year anniversary of the tragedy in December 2021.

Rounding out the eclectic and ambitious repertoire, the End-of-Year Concert also features The Wind Waker Movement from the Legend of Zelda Symphony by Andrés Soto, and a fantastic new Big Band arrangement by Jeremy Levy of “Mars: The Bringer of War” from The Planets (originally by Gustav Holst).

A combination of free community event and fundraiser, the End-of-Year Concert supports Awesöme Orchestra’s mission to make orchestral music accessible to players and audience members alike. Enjoy the epic sound of orchestral music in a relaxed and fun-loving environment.