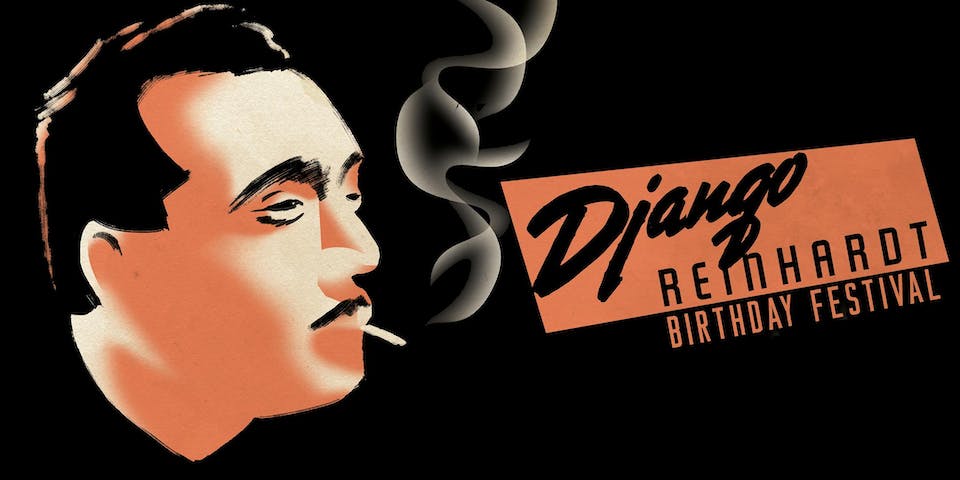 Join The Freight to celebrate the life and music of Django Reinhardt with three days of shows and workshops. Festival Artistic Director Paul Mehling and The Freight’s program director Peter Williams have assembled an all-star, international lineup of musicians. See the full schedule here.

One of the vanguards of the current gypsy jazz revival, Hot Club of San Francisco (HCSF) has integrated Django Reinhardt and Stephane Grappelli’s jazz manouche style with their own disparate influences to create a unique sound of their own. HCSF is the brainchild of guitarist Paul Mehling, who after years of playing with the famed country swing bandleader Dan Hicks, went out on his own to form a gypsy jazz band. Prior to his time with Hicks, Mehling had immersed himself in all things Django, even playing with a gypsy violinist in the Paris Metro for two years. The band’s first album was produced by Mehling and put out on the band’s own label in 1993. Since then, they’ve put out nine more fine albums of gypsy-flavored jazz including Lady in Red, Swing This and Postcards from Gypsyland. HCSF was instrumental in popularizing this growing Django movement, and now the revival is in full swing with Hot Clubs popping up in cities across the country. It is not a surprise then that HCSF was the first American band invited to play France’s storied Festival de Jazz Django Reinhardt in Samois-Sur-Seine.

Music has always been the language of guitarist Bireli Lagrene. Following in the footsteps of legendary gypsy jazz guitarist Django Reinhardt, Lagrene hails from Alsace and plays with incredible precision, strength and virtuosity – he is considered to be one of the world’s premiere practitioners of gypsy jazz.

Henry Acker is a fifteen year old gypsy jazz guitarist in the style of Django Reinhardt and with abilities far beyond his years. After playing for only six years, he has already shared the stage with jazz greats Bucky Pizzarelli, Frank Vignola, Julian Lage and Andreas Oberg as well as Gypsy Jazz legends Samson Schmitt, Mozes Rosenberg, Adrien Moignard, Joscho Stephane, Gonzalo Bergara, and Stephane Wrembel. He is the winner of the 2017 Djangofest North West Saga Award and a three time winner of the Downbeat Magazine Student Award for jazz guitar soloist. Based In Boston, MA, he also dazzles audiences at clubs and jazz festivals across the United States and Europe. He performs with his father, jazz guitarist Victor Acker and his Uncle Dana Acker on the double bass - both Berklee College of Music alum. Henry's career is in full swing and red hot. He really must be seen to be believed. Ladies and gentleman, presenting Henry Acker!