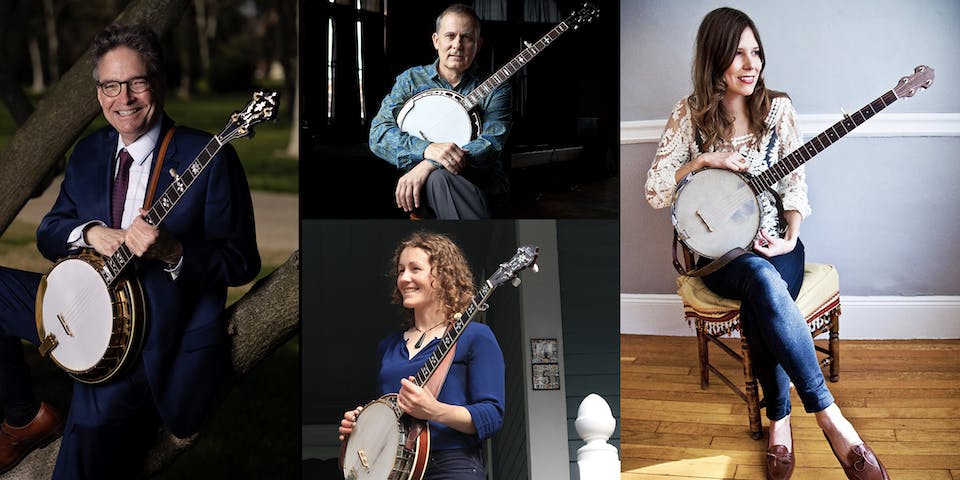 Freight at Home presents live streamed, FREE concerts from Freight favorites you can enjoy from anywhere in the world!

Each November, world-renowned banjo player Bill Evans brings together some of the best banjo players in the world for a series of incredible concerts across northern California. While touring is impossible this year, the Freight and Salvage is hosting the 9th Annual Banjo Extravaganza in a one-night-only online event concert event, along with an afternoon of banjo workshops via Zoom on Saturday, November 14th.

In previous years, the California Banjo Extravaganza has presented many of the best banjo players in the world, including Bill Keith, Gina Furtado, Tony Trischka, Danny Barnes, Chris Coole, Alan Munde, and Riley Baugus, among many others. This year offers another spectacular concert featuring four unique and internationally celebrated banjo talents.

Allison de Groot combines love for old-time music, technical skill and a creative approach to the banjo forming her own sound – unique and full of personality. Her collaborations with Tatiana Hargreaves, Bruce Molsky’s Mountain Drifters, the Goodbye Girls (with Molly Tuttle) and Nic Gariess have provided spaces to explore the role and depth of clawhammer banjo. Allison has toured all over the world, performing at events such as Hardly Strictly Bluegrass, the Newport Folk Festival, Celtic Connections, Rockygrass, and the Winnipeg Folk Festival. The music scene in her hometown of Winnipeg, Canada, immersion in Appalachian old-time communities, a performance degree from the Berklee College of Music in Boston and extensive touring throughout North America and Europe have all shaped her playing. Learn more about Allison by visiting www.allisondegroot.com.

“Allison de Groot is the kind of artist whose virtuosity is built on her strength as a player, performer and composer, combined with her appetite for new and old ideas. She’s transforming the banjo in a beautiful way, both for herself and for others who enter her musical space.” Bruce Molsky

As a classically trained musician and the first graduate of Virginia Commonwealth University’s Department of Music to earn a degree in performance with the banjo, John Bullard has established a critically-praised performing and recording career dedicated to exploring the artistic marriage of banjo and classical music. Through three album-length recordings, live performance, and workshops, Bullard continues to introduce the classical banjo to a growing audience worldwide.

Bullard’s concert repertoire includes solo, duet, and quartet performances of works from Bach, Vivaldi, Handel and others of the Baroque Period, along with later-period pieces by Schumann and others. More recently, Bullard has begun featuring new work by contemporary American composers, including Caprice in D Minor from composer Frank Mullen, and a set of 24 Preludes for Solo Banjo, commissioned from Adam Larrabee. In addition, Bullard is now working on a new collaboration with the genre-fusing composer Joshua Stamper. Learn more about John by visiting www.johnbullard.com.

“What Segovia did for the guitar, John Bullard may well do for the five-string banjo; elevate it to a respected classical instrument!” Wireless Catalog

“Bullard deserves an additional award for transcribing and developing a classical repertoire…and then having the audacity to play this music so masterfully.” Acoustic Musician

Born in the small town of Marton, New Zealand, Catherine "BB" Bowness spent her early years working and living in her family's Fish-and-Chip shop. Although an unlikely origin for a bluegrass banjo player, New Zealand would offer BB her first introduction to the instrument, sparking a lifelong love and fascination. A world away from the heart of bluegrass, BB spent much of her childhood teaching herself the instrument, and through dedication and tenacity became New Zealand School of Music's first banjo student. Inspired by her New Zealand predecessors, The Hamilton County Bluegrass Band, BB was always drawn to the five-piece full band, and after heading to America in 2012 she co-founded her current group, Mile Twelve. Immersing herself in the traditions of bluegrass and having studied jazz performance at university, BB's banjo playing is an exciting synthesis of new and old ideas. Her euphoric energy and love of the genre are readily apparent in any of her live performances. Currently, BB lives in Cambridge, MA. Mile Twelve has won numerous IBMA awards, including 2020 New Artists of the Year and 2017 Momentum Band of the Year. BB is a winner of the 2015 Freshgrass Banjo contest and is a 2020 recipient of the Steve Martin Banjo Award. Learn more about Catherine by visiting www.catherinebowness.com.

“She demonstrates a command of the instrument and plays with great rhythmic clarity both in the traditional and progressive realms. J. D. Crowe co-mingles with the future,” Tony Trischka

Bill Evans now calls New Mexico his home base but he’s proud of the 28 years spent as a San Francisco Bay Area-based banjo performer and teacher and his years of collaborative work with the Freight & Salvage Coffeehouse. Bill has spent a lifetime bringing together folks who love and play the five-string banjo. His books Bluegrass Banjo For Dummies and Banjo For Dummies are among the most popular instructional books in the world. These days, you’ll find Bill performing with flatpicking legend Dan Crary, with his solo show The Banjo In America and with Las Cruces, New Mexico’s Hard Road Trio. Over the last twenty years, he has shared the stage with David Bromberg, David Grisman, Peter Rowan, Dry Branch Fire Squad, Kathy Kallick, and Jody Stecher, among many others. His latest release is Prime Time, recorded with flatpicking guitar legend Dan Crary and bassist Wally Barnick. Bill offers online lessons at www.pegheadnation.com, hosts the Freight & Salvage Bluegrass Band Camp each January. Learn more about Bill by visiting www.billevansbanjo.com.

“The banjoist has a world view shared by a precious few. It shows in the breadth of this own bluegrass playing and, especially, through his composing. Evans infuses his work with hints of jazz, classic and music of other realms, all fitting snuggly into his conception of the bluegrass sound.” David Royko, The Chicago Tribune

How to watch the stream:

Stream will be embedded on this page (thefreight.org/stream), Facebook not required