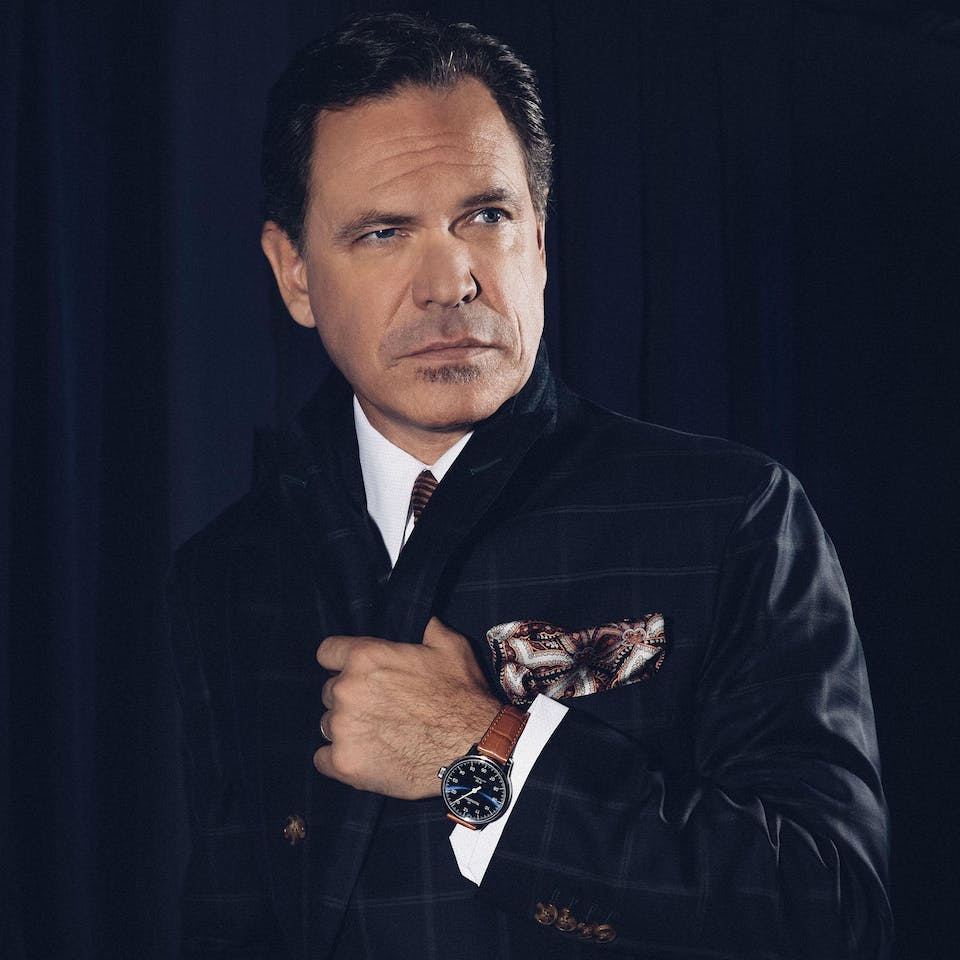 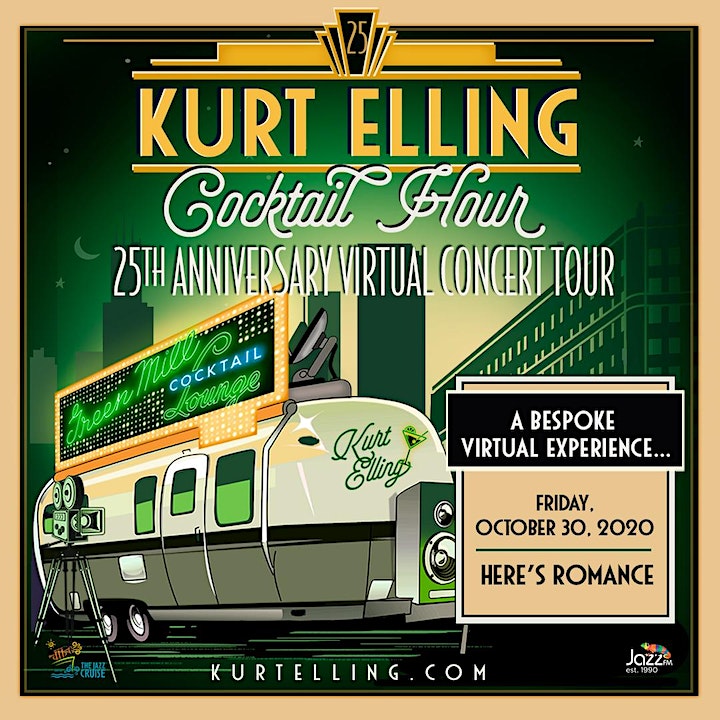 Celebrating the silver anniversary of Elling’s Blue Note debut, the series will feature five themed concerts on Friday nights in October and November via Mandolin.com

When he released his Blue Note debut, Close Your Eyes, in 1995, vocalist Kurt Elling could hardly have predicted the career that was to come: more than a dozen GRAMMY nominations, a fourteen-year run atop the DownBeat Critics Poll, eight Jazz Journalists As-sociation awards for “Male Singer of the Year,” collaborations with such renowned artists as Branford Marsalis, Brad Mehldau, Fred Hersch and Danilo Pérez, and universal recog-nition as one of the world’s foremost jazz vocalists.

Perhaps the most unpredictable fact about that acclaimed album’s 25th anniversary, howev-er, is that it would arrive in the midst of a global pandemic that’s silenced artists and shut-tered venues around the globe. Facing such an unprecedented situation and unable to cele-brate with audiences in person, Elling has decided to invite the world to join him at his longtime home base, Chicago’s iconic Green Mill. From that familiar stage in October and November, the singer will host a 25th Anniversary Virtual Concert Tour featuring five themed performances that look back on his rich career while continuing to surprise fans with the inventiveness for which he’s become known over the past quarter-century.

“My latest record, Secrets Are the Best Stories, was released in April just as the shutdown was starting,” Elling says. “My band and I have been losing our minds since nobody’s been able to play. As somebody who absolutely needs to perform, it’s thrilling to finally have a situation where I can sing full voice, in real time with real people close to me on the stand. I hope that it will also be a joy for people who can tune in.”

Over the course of these five concerts, Elling will be accompanied by a new version of his working band, with pianist and organist Stu Mindeman, bassist Clark Sommers and drummer Dana Hall, with guitarist John McLean joining the group for select performanc-es, along with a host of special guests. The series will be streamed via the newly-launched Mandolin.com, a high-quality streaming service designed especially to present live music. Shows will take place Friday at [3pm and 8pm Chicago Time] and be available for view-ing over the ensuing 48 hours.

Tickets will cost $60 for the series or $15 for individual tickets, with virtual meet and greets and ticket bundles also available. Elling and his team have also assembled a network of af-filiates to help spread the word and reach fans in different markets, with The Jazz Cruise onboard as the main sponsor and Jazz FM in the UK as media sponsor; venues around the world will be involved as gateways to the series, with each receiving a percentage of sales for tickets sold under their auspices.

The series brings Elling’s career full circle in more ways than one; last summer saw him return to his native Chicago after a dozen years in New York, making the Green Mill once again his hometown club. “For the twelve years that I was in New York, I still felt more or less like a transplanted Chicagoan,” Elling says. “There were so many indicators that this is really where I belong. My band is still mostly made up of people living in Chicago – maybe it’s just the way we hear things. But I know a lot of the ghosts that are here; I know why streets are named what they’re named. I find this city very inspiring, from the front lawn along the lakefront to the working class backbone farther away from the lake. I feel a real kinship with this city, I want it to thrive, and I want it to be proud of me.” The Virtual Concert Tour is Elling’s contribution to helping jazz survive in the Windy City and beyond, even as the music industry faces the daunting struggles presented by the ongo-ing COVID lockdowns. That new reality will be evident during the livestreams, as the singer’s bandmates will all be wearing masks, will be socially distanced to the extent al-lowed by the stage, and will perform before an intimate, distanced audience of a very few invited guests. But it will also provide an international showcase for one of the country’s finest jazz clubs, one with which Elling’s name has been synonymous since the early days of his career.

“The Green Mill is my home club,” Elling explains. “I really want to shine a light on how beautiful that room is and how much of a difference it’s made over so many decades to so many fans and artists.”

The series launches on Friday, October 9, with the “25th Anniversary Concert.” While the event will harken back to Close Your Eyes and undoubtedly feature some of the most beloved songs from that album, it won’t simply reprise the classics. Never one to keep his eyes in the rearview mirror, Elling is seizing the opportunity to dust off some old favorites in new forms as well as complement those songs with some new surprises. He’ll supple-ment the music with stories and reminiscences about the creation of the album and experi-ences in the studio. “It’s really about trying to skim the cream from the top,” Elling says, “revisit some things that I feel like I can expand upon or do better, and then try out some new ideas.”

The other dates in the series include:

October 16: “Celebrating the Heroes” – Honoring the legends that paved the way for Elling’s generation, the evening will feature songs from the catalogue by past greats, from Jon Hendricks to Dexter Gordon to Joe Zawinul. The list of Elling’s heroes would be in-complete without the poets who have inspired him lyrically, so the setlist could include his settings of work by Rumi, Wallace Stevens, Franz Wright, Robert Bly and others.

October 23: “K-Pop” – No, Elling will not be showing off his dance moves or covering BTS. The “K” in this case stands for Kurt, and this concert will feature the vocalist’s interpretations of pop songs, with John McLean on guitar. Elling has reached deep into pop music history throughout his discography, from Brill Building classics to soulful favorites like “You Send Me” and harmonically and lyrically rich songs by the likes of Stevie Wonder and U2.

October 30: “Here’s Romance” – The topic of love – lost, found, yearned for and drowned in spirits – is naturally well represented in Elling’s music. The Great American Songbook will no doubt be exhaustively explored, though the universal subject of romance offers no end of possibilities for a music lover of Elling’s wide-spanning tastes.

November 13: “The Big Blind” – The series culminates with a special, one-of-a-kind re-prisal of Elling’s radio-style musical drama The Big Blind, which premiered in 2019 at Jazz at Lincoln Center with an all-star cast including Broadway legend Ben Vereen and NEA Jazz Master Dee Dee Bridgewater. Co-written by Grammy-nominated songwriter Phil Galdston, the piece will be transformed for this performance into a narrated piece, allowing Elling to perform the piece alone while wandering through cinematic vignettes in the appro-priately noir-friendly confines of the Green Mill.