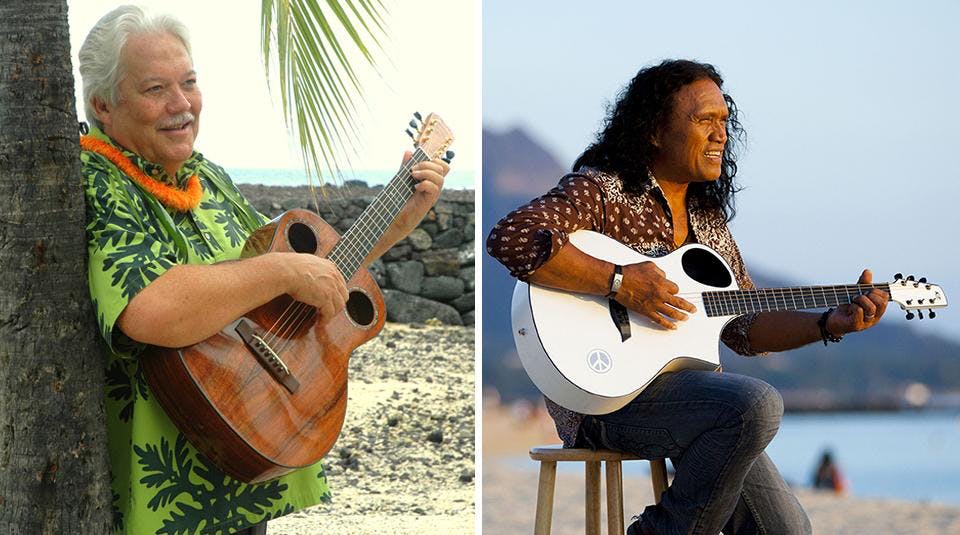 “Kapono is one of the great island songwriters of his generation.” –Honolulu Star-Advertiser

Keola Beamer & Henry Kapono are two legends of Hawaiian music. Each became an icon in the 1970s, both at the creative forefront as Hawaiian music reinvented itself. They have continued to lead the way for over 4 decades.

Despite their common history, Keola & Henry only performed together for the first time in 2014, when Henry invited Keola & Moana Beamer to be part of Back in the Day performances. This successful annual show features Hawai‘i’s musical greats who shaped Hawaiian music from the ‘70s on, part of the “Hawaiian Renaissance” — the seminal movement in Hawai‘i’s cultural history that brought language, music, hula, art, and all aspects of Hawaiian culture back to their central place in the life of the Islands.

Keola Beamer’s contributions to slack key guitar during the 1970s began to spark public interest in kī-hō‘alu, launching a statewide revival of the tradition, and his 1978 release, Honolulu City Lights, is the largest selling recording in the history of Hawaiian music. Today he is one of Hawai’i’s premier singer-songwriters, arrangers, composers and masters of the Hawaiian slack key guitar.

Henry Kapono became the wildly popular phenomenon Cecilio & Kapono (aka C&K) with Cecilio Rodriguez. They helped forge the sound of 70s Hawaiian music, with laid-back contemporary rock that voiced the feelings of an entire generation in Hawai‘i. Today as a solo artist, Henry is a Grammy-nominated and award-winning singer and songwriter.