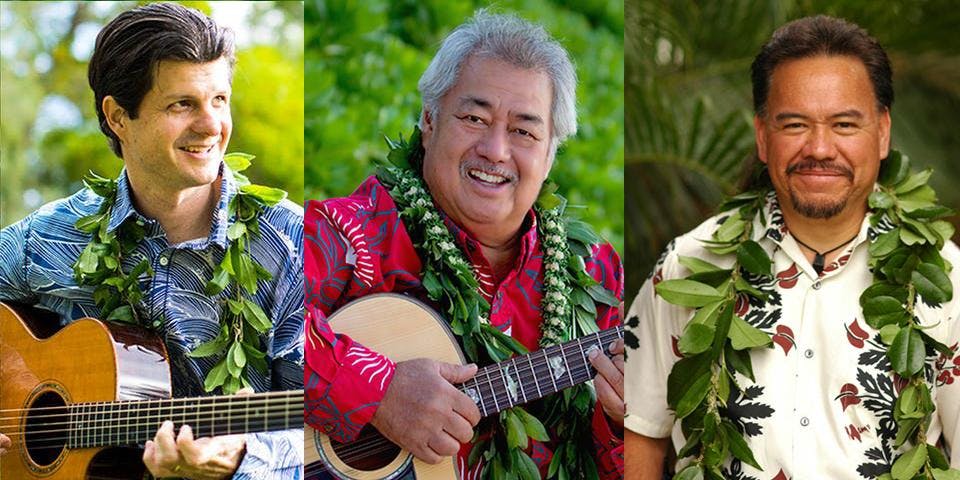 “Virtuosic keepers of a cultural flame… Bringing folklore & cultural memory into a performance that unfolded as breezy entertainment.” – The New York Times

Guitar virtuoso JEFF PETERSON is one of the most versatile musicians in Hawaiian music today. Specializing in Slack Key, Classical, and Jazz guitar, he has contributed to two Grammy-winning recordings and has been honored with 8 Na Hōkū Awards (Hawaii’s “Grammy”). Five of his songs are in the George Clooney film The Descendants.

SONNY LIM, a member of Hawaii's famous musical Lim family, was born and raised in the heart of paniolo (cowboy) country on the Big Island. Sonny's parents taught their children to play a variety of musical instruments. Over the past two decades Sonny has performed with virtually every 'name' musician in Hawaii. He is a multiple Hoku award winner, performs regularly with his family in Hawaii and Japan, and performed on Hawaii's first GRAMMY CD, "Slack Key Guitar Volume 2" (Palm Records). Sonny helped to accept the inaugural Hawaiian GRAMMY Award with GRAMMY Award winning producer Charles Michael Brotman in 2005. Sonny's speech was in Hawaiian - the first time ever that the Hawaiian language was spoken on the GRAMMY stage.