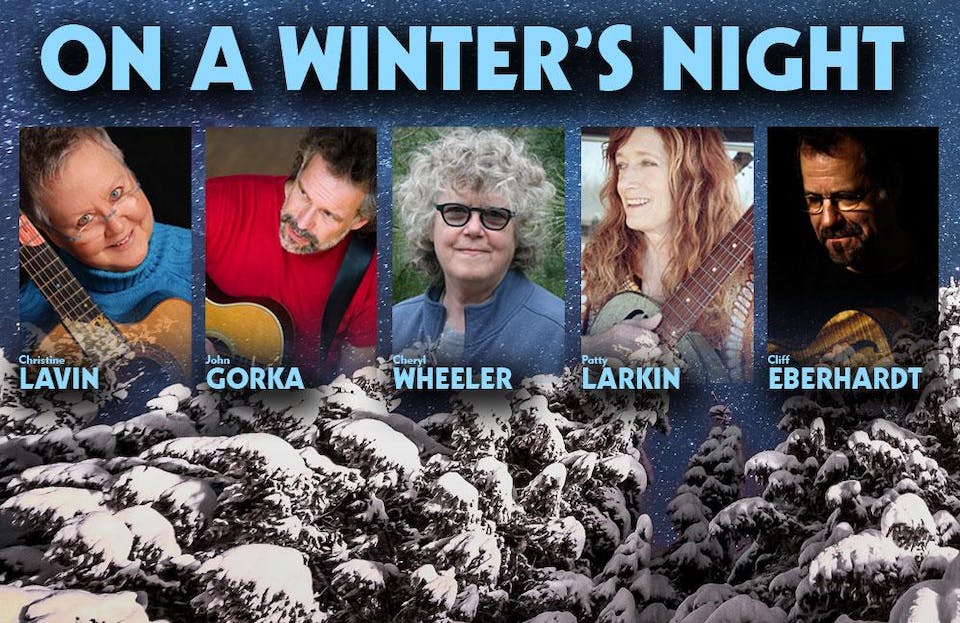 iCal
Google
On A Winter's Night

Presenting the 25th Anniversary concerts of “On A Winter’s Night” from veteran singer-songwriters Christine Lavin, John Gorka, Patty Larkin, Cheryl Wheeler and Cliff Eberhardt. These are among the brightest stars of the singer/songwriter movement for the past three decades. In 1994 Christine Lavin gathered them together, along with folk and Americana artists to showcase music of the Winter Season on the now classic On A Winter’s Night CD, followed by several years of touring collaborations. These artists have released dozens of recordings and toured steadily through the decades, with fond memories of their touring days together.

The New Yorker calls her, “wildly entertaining.” The Orlando Sentinel calls her, “a folkZinger.” She’s working on her 24th solo album. ASCAP awarded her book, Cold Pizza For Breakfast, the 43rd Annual Deems Taylor Award. Broadway stars Betty Buckley and Sutton Foster sing her songs. In April 2019 she’s inducted into the Rochester NY Music Hall Of Fame. When not making music, she makes videos. When not making videos, she bakes bread. But most of all she loves touring with musicians whose work she adores.

Hailed by Rolling Stone as “the leading singer/songwriter of the New Folk movement,” John Gorka is perhaps the quintessential singer-songwriter of the 90’s folk scene. Originally from New Jersey, John served an apprenticeship at Godfrey Daniels coffeehouse in Bethlehem, PA, then the Greenwich Village Fast Folk scene. Winning the prestigious New Folk award at the Kerrville Folk Festival, in 1984, he was then signed to Red House Records on which he released his landmark first of 17 recordings, I Know. Boston Globe penned Gorka “for the sophisticated intelligence and the provocative originality of his songs.” Recent accolades include 2016’s Indie Acoustic Project’s Best Singer/Songwriter CD of the Year for Before Beginning (Red House Records). 2018 brought his latest release, and 14th of his career, True In Time (Compass Records).

Brilliant, hysterical performances and beautifully crafted songs, Cheryl Wheeler truly needs to be seen to be appreciated. Nothing you read in print, nor nothing you hear on her albums prepares you for how good a performer she is. You may not be familiar with Cheryl, but you have probably heard her music. Highly respected as a songwriter by her peers, Wheeler’s songs have been covered by artists like Dan Seals, Peter Paul and Mary, Kenny Loggins, Garth Brooks, Suzy Boggus, Melanie, Bette Midler, Maura O’Connell, Sylvia, Kathy Mattea, and Holly Near. “Strong poetry, complex melodies, clever wit.” (Singout!)

She redefines the boundaries of folk-urban pop music with her inventive guitar wizardry and uncompromising lyrics and vocals. Acoustic Guitar Magazine hails her, “soundscape experiments” while Rolling Stone praises her, “evocative and sonic shading.” She has been described as, “riveting” (Chicago Tribune), “hypnotic” (Entertainment Weekly), and a “drop-dead brilliant” performer (Performing Songwriter). Recently an Artist-in-Residence at Berklee College of Music – and now on the faculty at Fine Arts Work Center – Larkin reflects, “I have been energized by the poets, writers and artists I have met while teaching, and find myself on a journey to break down some of the predictable pathways that songs can travel.” Her 14th CD, Bird In A Cage, is currently in production.

One of the most original songsmiths currently on tour, Eberhardt is a highly intelligent, articulate artist whose penetrating and profound lyrics are sometimes overshadowed by his extraordinary guitar playing. Upon close listening, the Philadelphia-born singer’s gift for the English language is abundantly clear. The words that tumble from his mouth are framed by a raspy yet deeply elegant voice. Like John Hammond and Richie Havens, Eberhardt continues to carry the torch for traditional and contemporary folk music through his strong live shows. Whether he’s out on tour solo or with a small band, Eberhardt’s guitar playing, singing, and original folk songs and blues make for a compelling, thought-filled, emotional roller coaster of a concert.