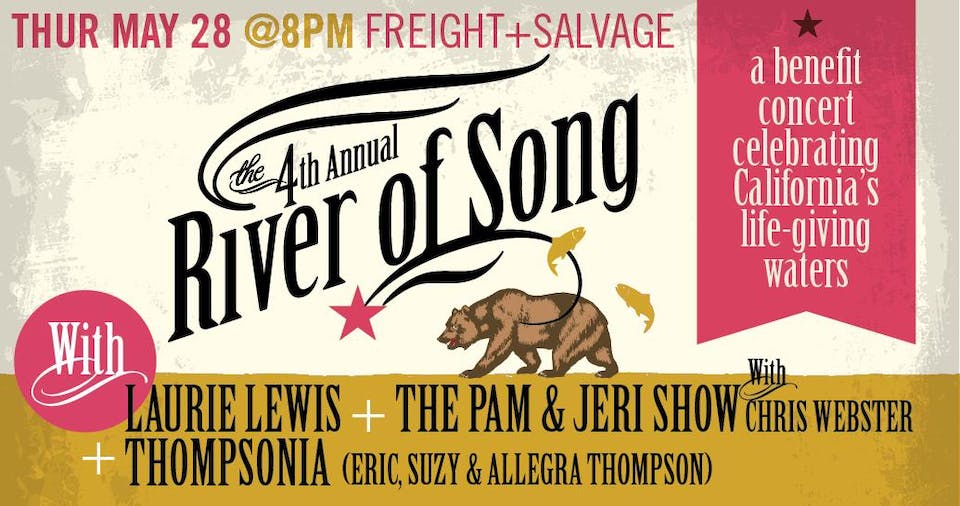 Proceeds to benefit Friends of the River and the Foothill Conservancy

River of Song: A Musical Celebration of California's Life-Giving Waters

Proceeds from this concert benefit Friends of the River and the Foothill Conservancy, organizations that are dedicated to preserving and protecting, among other things, the East Bay’s drinking water.

For more information on these organizations, visit their websites:

Friends of the River

“Her voice is a rare combination of grit and grace, strength and delicacy. Her stories are always true.” - Linda Ronstadt

Laurie Lewis is one of the most acclaimed and accomplished performers on the acoustic-music scene today. A stirring vocalist, gifted songwriter, champion fiddler, and topnotch bandleader, she has won a Grammy and twice been named Female Vocalist of the Year by the International Bluegrass Music Association. With nearly 20 solo, duo, and band albums to her credit, she has just released Blossoms (Spruce and Maple Music), a winning collection of originals and covers that explores new territory while remaining true to her beloved Americana roots.

Chris Webster is a soul singer. Her voice conveys a passion that connects with the longings of her audience. She expresses sometimes-troubled feelings that everyone understands. But Webster goes beyond pain to hope; her voice can be a compassionate balm to the troubled soul. Performing live, her intensity brings a hush to every room she plays. Those who see her hear it: Chris Webster is the real deal, a singer who transcends genre.

Thompsonia combines Eric & Suzy Thompson’s deep devotion to old-time, bluegrass, Cajun and acoustic blues with daughter Allegra’s fresh perspective, creating feel-good music that richochets between the rowdy and the sentimental, with an abundance of groove and a bit of a quirky edge. The band features the genetically-matched vocals of Suzy and Allegra (Geoff Muldaur has dubbed this “The Everly Sisters sound”) along with stellar lead playing from Eric on mandolin and guitar, Suzy’s red-hot fiddling and Allegra’s rock-steady upright bass.