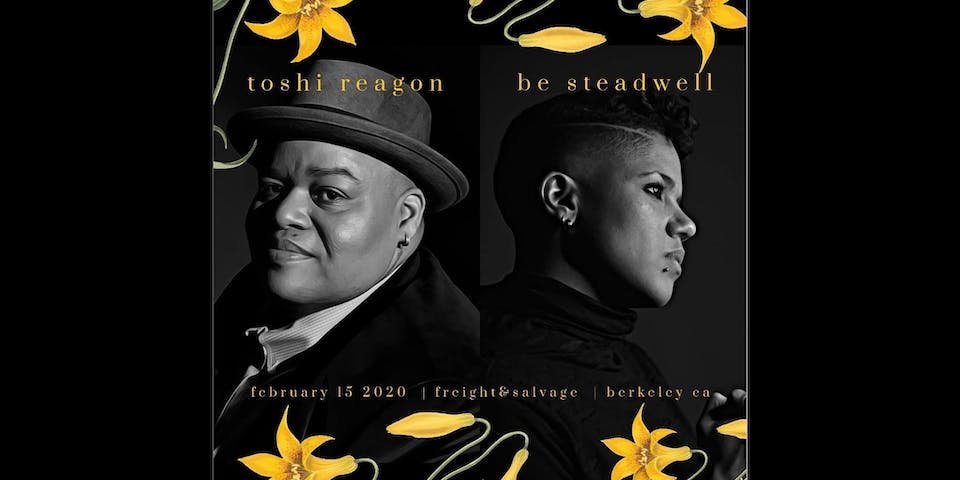 iCal
Google
Toshi Reagon and Be Steadwell with Special Guest

Toshi Reagon and Be Steadwell met in 2012 when Be performed at the 2nd annual Word*Rock*Sword:A Musical Celebration of Women's LIves a festival produced by Toshi. Since them they have collaborated on many projects including the 2017 Women's March band, 2018 Kimmel Center Gala, 2019 Soul Mechanism Concert as part of Carnegie Hall's Migrations Festival, 2019 Ucross Octavia E. Butler's Parable of the Sower Residency. This special duet concert is one of three in exploration of their musical possibilities together.

TOSHI REAGON (Singer, Composer, Musician, Curator, Producer) is a talented and versatile singer, composer, musician, with a profound ear for sonic Americana—from folk to funk, from blues to rock. While her expansive career has landed her at Carnegie Hall, the Paris Opera House and Madison Square Garden, you can just as easily find Toshi turning out at a music festival, intimate venue or local club.

She has collaborated with many artists including Lizz Wright, Meshell Ndegeocello, Lenny Kravitz, Elvis Costello, Jason Moran, Climbing PoeTree and Nona Hendryx. As a composer for dance and theater works, she has worked with Michelle Dorrance Katori Hall, Urban Bush Women and The Jane Comfort Dance Co., among others. She is currently touring Bessie Award-winning The Blues Project with tap dancer Michelle Dorrance and Dorrance Dance. Together with her mother Bernice Johnson Reagon, she has created two operas with director Robert Wilson, The Temptation of St. Anthony and Zinnias, The Life of Clementine Hunter. She is a composer and performer in Meshell Ndegeocello’s Can I Get A Witness: The Gospel of James Baldwin. Toshi Reagon and Bernice Johnson Reagon created the opera Octavia E. Butler’s Parable of the Sower. The next performances for Octavia E Butler's Parable of the Sower are March 7th CAP UCLA, March 26-29 ArtsEmerson Boston.

Toshi co-composed music for two Peabody Award-winning films and received a NYFA Award for Music Composition, the 2010, an OutMusic Heritage Award and The Black Lily Music and Film Festival Award for Outstanding Performance. She is a National Women’s History Month honoree and was named a 2015 Art of Change Fellow by the Ford Foundation. She is an Andrew W. Melon DisTil Fellow with Carolina Performing Arts, a 2018 United States Artist Fellow, and a Andrew W. Melon Creative Futures Fellow Carolina Performing Arts 2018-2022..

Toshi resides in Brooklyn NY. From there she continues to tour as a solo artist and with her band Toshi Reagon and BIGLovely. She founded WORD*ROCK*&SWORD: A Festival Exploration of Women's Lives, a community festival that takes place throughout New York City every September since 2011. Through her company Wise Reagon Arts she curates and produces several events a year with the intention of creating congregational spaces.

Her latest recording is SPIRITLAND available on digital release through Bandcamp.com.

Be Steadwell is a singer songwriter from Washington DC. A blend of soul, acapella and folk-Be calls her music QUEER POP. In her live performances, she utilizes looping, vocal layering and beat boxing to compose her songs on stage. Be's original music features earnest lyricism, and Affirming LGBTQ content.

As she pursued her career in music, she began a career in film. Shooting and editing her own music videos, Be combined her love of music with narrative film. Her film Vow of Silence received awards at film festivals around the world, including Black Star, QWOCMAP, and Fringe Fest UK. This year, Issa Rae Featured vow of Silence in her Short Film sundays Series. After receiving a BA at Oberlin College, Be completed her MFA in film at Howard University in 2014.

Be has shared stages with fellow artist Activists Big Freedia, Nona Hendryx, Nikky Finney and Gina Yashere. In 2017 Be sang at The Women's March on the National Mall behind Maxwell and Janelle Monae in Toshi Reagon's Big Lovely Band. In may 2018 Be released her studio album "Queer Love Songs". In her latest work - A Letter to My Ex, the musical, Be tells stories of love, loss and intimacy through a collage of music, movement and film -- narrating one character’s journey through the year following a breakup.